Despite a gradual decline from the peak of 2014, non-performing loans remain an important problem in several Eurozone countries. Furthermore, the economic implications of the Covid-19 pandemic may undermine the result of the deleveraging of NPEs that began in 2015 which produced a steady reduction in the stock of non-performing loans in the euro area and translated into a significant increase in the share of defaulting loans.

The interconnections between non-performing loans, the banking sector and the overall macroeconomic system suggest that an increase in NPEs has a negative effect on GDP growth, depresses bank credit and leads to a decline in residential property prices. Therefore, we can understand the importance of adopting economic measures associated with structural prudential policies that address the resolution of the problem of non-performing loans1.

In the period preceding the pandemic, the reduction in non-performing loans had allowed market operators to focus their attention on UTPs (here for more information), the economic situation following the Covid-19 emergency led to total uncertainty about the evolution of the market in the years to come, with forecasts of a probable increase in the total volume of exposures (NPE), both non-performing and unlikely to pay (UTP), due to the new flows of NPEs arriving, whose volume can be hypothesized to be between 80/100 billion in the next 24/30 months.2

The public support measures (moratoriums on outstanding loans, freezing of layoffs and guaranteed loans) have had an important role in containing credit risk throughout 2020 and in the first part of 2021, avoiding a possible credit crunch and slowing down the issuance of NPLs, with an NPE ratio below the 5% threshold as required by the ECB. In 2022, with the end of the moratoriums, a default rate of 3% is expected (up from 1.4% in 2021)3 with a stock of UTPs that will be higher than that of NPLs and with NPE flows that will come mainly from the small and medium-sized enterprises belonging to the sectors most affected by the crisis.

Bank consolidation, calendar provisioning and ECB guidelines will oblige banks to continue their deleveraging strategy, also with the support of the one-year extension of the GACS which will bring about 7 billion of new guaranteed transactions for a total amount of 94 billion of securitized portfolios from 2016 to today. 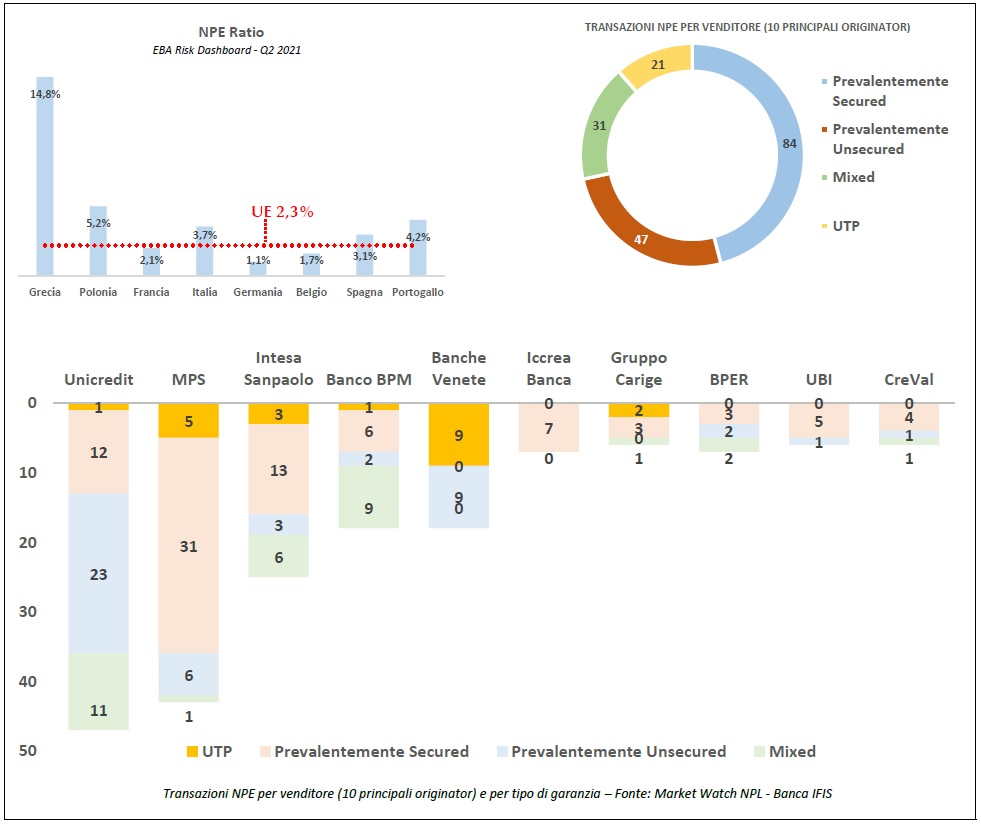